« One Day Only Sale on BravoBride!
It’s a Nice Day For a White Wedding » 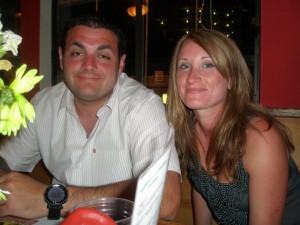 We came across this story and just had to share it. This couple will have an unforgettable and very meaningful anniversary date.

Eddie Casinover and Christine Briggs were only 19 and 20 when the September 11th attacks happened. This year they choose to celebrate the day in a different way – they’re getting married. They were planning to pay for the wedding themselves but money was tight. On a whim, Casinover entered Musket Ridge Golf Club‘s Love and Liberty Wedding Giveaway. The prize was a wedding hosted by the golf club and a sit-down dinner reception for 150 guests.

Musket Ridge opened the week before Sept.11, and the giveaway was created  to celebrate the service and sacrifice of the military and first responders. It was a fitting win for the couple because Casinover is also in the military. He served with the Army’s 101st Airborne Division in Iraq and now works as a consultant with the Department of Defense.

Although the couple did hesitate about the date they decided it was right for them. “The more I thought about it,” Briggs says, “I was like, ‘You know what? If we don’t take that day back at some point and start celebrating something else, the terrorists win.’

They also decided to do an all American theme.”Most of the people we hang around with are friends of Eddie’s and in the military,” Briggs says. “All the girls will be in blue dresses with red shoes; I’ll be the white.”

On a day like this it’s nice to know that although we will never forget what happened we can look forward to the future too.