« Just when you thought wedding cake couldn’t get any better!
The Tradition of Wedding Rings » 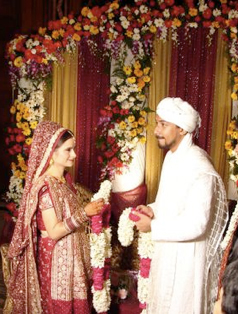 This past weekend I went to my first Indian wedding and it was quite a celebration! The festivities began Friday night at a Sangeet, which is kind of like a rehearsal dinner just much bigger with lots of food, drinks and dancing. The ceremony took place on Saturday morning in a temple where their customs included covering your head with a scarf and taking your shoes off before entering. The wedding reception was on Saturday night and had many of the same traditions as a Western wedding such as cutting the cake, the first dance and of course, wedding toasts. It was an amazing cultural experience that I will never forget.

I did some more research on Hindu weddings and here’s what I found:

Hindu weddings are very cheerful and last several days. It is a true joyous celebration that is filled with symbolism and tradition, as weddings are all over the planet.

For starters, the bride gets to wear two dresses (Saris). One of them is white, symbolizing the bride’s purity prior to her wedding and the other is red and symbolizes fertility. The bride gets the first dress from her uncles and the second one from the groom’s family.

The night before the wedding, the bride enjoys a quiet and reflective evening with her close women relatives and friends. During this time they ceremonially paint their palms and feet.

On the wedding day, as in many other cultures, the groom is not allowed to see the bride until after the bride’s mother has greeted him by placing a red dot on his forehead and presenting him with a wreath of flowers to symbolize her approval for the nuptials. The bride’s mother and the groom’s sisters walk with him to the ceremony following close behind to ward off evil spirits. Before walking into the ceremony, the groom must step on a clay pot and break it. This symbolizes his strength. While he waits for the bride, his parents wash his feet. Finally, the bride enters the ceremony carried or accompanied by her uncles and brought to the groom.

Fire is an important symbol in Hindu weddings. The bride and groom both make seven encirclements around the the Sacred Fire or Agni.  Another beautiful and particularly interesting tradition in a Hindu wedding is the seven steps together:

First step: To respect and honor each other; Second step: To share each other’s joy and sorrow; Third step: To trust and be loyal to each other; Fourth step: To cultivate appreciation for knowledge, values, sacrifice and service; Fifth step: To reconfirm their vow of purity, love family duties and spiritual growth; Sixth step: To follow principles of Dharma (righteousness); Seventh step: To nurture an eternal bond of friendship and love

Even though you may not be Hindu, there are still aspects of the Hindu ceremony you may choose to adapt to your own. Maybe you were thinking of walking down the aisle in a used wedding gown (a very wise decision, given the current economic downturn), but why not a colorful sari? That would get everyone’s attention!

One Response to “Hindu Wedding Traditions”