« Marriage at the end of a 60 mile walk
Our favorite preowned wedding gown! »

What is up with all these athletic bride and grooms lately : )  We wrote about a wedding proposal that took place during a 5k race, a couple that got married after the 60 mile Susan G. Komen walk and now a couple who got hitched before a triathlon. They sure are making me feel lazy; I slept in, went to lunch with my maid of honor and drank champagne before my wedding. Read on to learn about this unique wedding, especially their wedding ‘rings’… 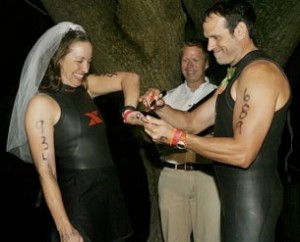 For her wedding, Danelle Weidman wore a lovely white veil and wetsuit. The 38-year-old bride also vowed never, ever to leave her betrothed — unless her true love couldn’t keep up during the Great Floridian Triathlon, where the two endurance athletes were married before the sun rose on Saturday’s race.

The pre-event nuptial was a first for Fred Sommer, director of the 19th annual Lake County race in which competitors swim 2.4 miles in Lake Minneola, bike 112 miles up and around Sugarloaf Mountain and run a marathon of 26 miles-plus.

“In the past, we’ve had some people drop on a knee at the finish line and propose,” Sommer said. “But we’ve always figured that was because they had spent 10 or 11 hours in the heat and they were delirious.”

Weidman and groom Kent Fawcett, 43, have prepared for and competed in 50 long-distance races since they met at a church retreat in Georgia six years ago, so they figured they were ready for the ultimate endurance test: marriage.

Fawcett proposed by giving Weldman a competition bike instead of a ring. At the pre-race nuptuals, Fawcett and Weldman both used a black marker to draw on each others wedding ring.

The Rev. Glynn Ferguson of Kissimmee, an Ironman athlete, admitted that he considered it a challenge to find the right words for the pre-dawn service, which took place under a grandfatherly oak tree near the starting blocks.

“Success in marriage is not a sprint race. It is not something that can be accomplished with little training or preparation. Marriage is like an Iron event,” Ferguson told the couple as they held hands in front of a small knot of family and friends wearing orange “Iron Wedding” caps. “Today, Kent and Danelle, when you pledge to love and care for each other in marriage, you will create a bond which will bind you closer than even your wetsuit to your skin.”

At the end of the service, the groom was told he could now “race the bride.”